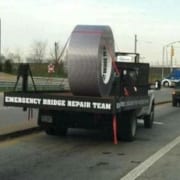 Duct tape is like the universe. It has a light side, and a dark side, and it holds everything together, as the saying goes.

Unfortunately, this old axiom doesn’t hold true for the one thing it would seem duct tape was actually made for, sealing ducts. It’s counter-intuitive, and maybe even a little deceptive, but duct tape won’t seal HVAC ducts in your home. At least not for long. In fact, it might be one of the worst materials you can use to seal ducts, according to a 1998 study by University of California Berkeley scientists. “We tried as many different kinds of duct sealants as we could get our hands on,” one researcher told Berkeley Research News. “Of all the things we tested, only duct tape failed. It failed reliably and often quite catastrophically.” In this elaborate and fairly robust study, only one brand of duct tape survived their three month aging test. Eleven failed within days.

On virtually all the duct taped ducts I’ve seen during home inspections, they were failing in one way or another. Some duct taped joints are assisted with clamps, which helps for a time, but eventually, and in a relatively short period of time, those too fail. As hot and cold air fluctuate through the ducts in your home, the fabric-backed tape with rubber adhesive that is duct tape, breaks down, loses its stickiness, and falls off. 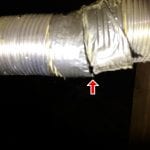 One of the most common places homeowners use duct tape is on dryer vent ducting in the crawlspace. This is especially problematic because once the duct tape fails, your dryer is pumping warm, moist air promoting an ideal environment for mold and insects.

If your heating and cooling ducts are leaking, you’re losing energy and money.

Some duct tapes will claim to be “HVAC-strength” or have an Underwriters Laboratory (UL) seal of approval on it. It’s deceiving, but what those refer is not the tape’s longevity, but things like how strong it is and its fire resistance.

What should you use to seal ducts?

The best and most available duct sealants are mastics — a sticky, gooey substance that comes out in a liquid form and cures in an elastic state. This allows it to be flexible, while keeping its bond to the metal. Using mastic instead of duct tape on HVAC ducts is an easy and cheap way to improve the energy efficiency of your home and save money.

Want to join the discussion?
Feel free to contribute!