Carbon Monoxide, CO, is a colorless, odorless, and tasteless dangerous gas that can easily occur in homes. Unsafe levels of CO does not have warning signs, other than debilitating your metal capacity, which is challenging to recognize for obvious reasons. CO poisoning can cause sudden illness and even kill. In the latest Washington State Department of Health study, 54 people died from unintentional carbon monoxide poisoning between 2013-2015. And, even exposure to low levels over an extended time period can lead to health problems, including an increased risk of heart disease. 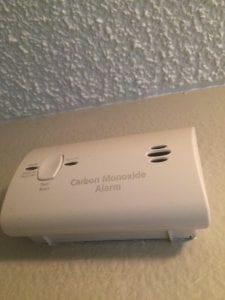 The easiest way to protect yourself and your family is to install CO detectors. These are often combined with smoke alarms, but are commonly sold as standalone units. Washington state requires their installation in all new and existing dwellings outside each sleeping area.
When buying or selling a home, have a home inspector test and inspect the CO detectors in the home. Most CO detector components have a lifespan of five to seven years, which is less than the average 10-year lifespan of smoke alarms. If you have a combination smoke/CO detector, be sure to read the manufacturer’s guidelines carefully to know when you should replace the detectors.

Missing or non-functioning CO detectors are all too commonly found in home inspections. This is a dangerous defect and is also called out in home appraisals. Their absence is especially notable in homes with oil and gas-fired appliances, such as water heaters, furnaces (should be inspected every year), and other appliances, as well as wood-burning fire places. CO gas is created when these systems fire, and without proper ventilation, can lead to tragedy. Your home inspector should inspect the areas where these systems are located and inspect the ventilation systems.Another way CO gas can enter the home is from the garage. Cars or other idling combustion engines, like generators, that are often operated in the garage produce CO. The gas can seep in underneath the door to the home and create dangerous CO levels. That’s why it’s smart to not only operate combustion engines in open air environments install, but also to install CO detectors in the garage. Another way to help prevent CO from entering the house from the garage is to install weatherstripping on the bottom of the door to the home. This will create a seal and block the gases from entering with the added benefit of increasing you home’s energy efficiency.

CO poisoning often spikes during power outages when people use oil, gas, and wood-fired heating systems to stay warm. In December 2006, the City of Vancouver, WA reported that more than 300 people were treated at hospital emergency rooms for CO poisoning and eight people died.
Here’s a great resource for more information on CO from the NFPA.

“Beginning January 1, 2011, state law required CO alarms to be installed in all new single family homes and residences, including apartments, condominiums, hotels, and motels,” according to City of Vancouver, WA. “State law requires CO alarms be installed in existing apartments, condominiums, hotels, motels and single-family residences by January 1, 2013. Owner-occupied single-family residences, legally occupied before July 26, 2009, are not required to have CO alarms until they are sold.”