Your deck. It’s where you go to relax. Chill. Party.

It’s also a death trap! Not really. But many decks are built incorrectly, compromising their structural integrity, and in turn, your safety.
Decks appear to be a relatively simple construction, but decks are required to withstand certain structural stresses and pressures that are often overlooked when they’re built. Surprisingly, at least to me, a DIY deck build is just as likely to fail as a deck built by a professional contractor, according to the International Association of Certified Home Inspectors (which has an interesting and comprehensive article on decks you can read here). Decks also require certain safety features that are especially important for elevated decks, like sturdy railings and proper structural footings. 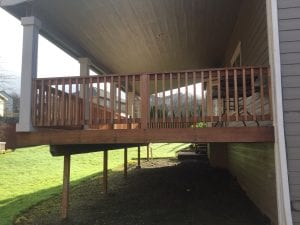 When I conduct a deck inspection, I think about how my child would use it and what features would keep him safe. I also think about how it’s attached to the home and its ability to withstand lateral or uplift loads from big storms or earthquakes. Finally, I image how someone with disabilities or an elderly person might use the deck — is it accessible for them?
This is what informs a Northbank Home Inspection deck inspection. Here’s a breakdown of pertinent deck inspection items:
Handrails: Decks are notorious for not having appropriate handrails, or handrails at all, for stairways. All stairways should have handrails for safety and accessibility, in my opinion. Handrails are especially important for the elderly and children who might need the extra stability a handrail provides. Technically, stairways having four or more risers or rising more than 30 inches (76 cm), whichever is less, should be equipped with a graspable handrail, according to Washington state guidelines and most other building codes. Handrails should also be graspable, so no 6-inch-wide horizontals or similar design that would make it hard to wrap your hand around.
Railing: Best practice safety standards recommend deck railing be able to support 200 lbs of force. Basically, if an average-sized person were to fall into the railing, it should be able to reasonably withstand that force. This is important on all decks, but especially on second-story decks or balconies where the fall would be much more significant and likely to injure more seriously. Railing balusters should also be spaced appropriately — best practices limit the opening to not allow the passage of a 4-inch sphere. Basically, it’s to keep your child’s head from getting stuck and prevent them from falling through. They should also be vertical and not horizontal, which can quickly turn into a ladder for children or your drunk friend.
Ledger Board: 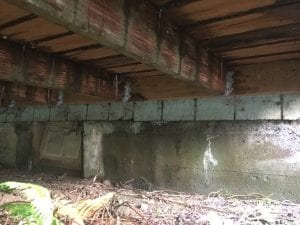 The most common cause of deck failure, according to INACHI, is when the deck pulls away from the house. The deficiency that causes this is an improperly attached ledger board. The ledger board, which attaches the deck to the structure, should be installed with alternating (up and down) lag bolts or screws between joists. Often, the ledger is attached with a few nails here and there, which over time and use, do not hold.

Stairs: Stairs often seem to be an afterthought in deck construction and are commonly substandard. One pervasive issue is open risers, which allows a person who steps a little too deep and gets their foot caught beneath the step above, to trip. Additionally, they can also be a safety hazard for children who might lodge themselves between them and become stuck or fall through. Another common hazard is the uneven height of steps. Best safety practices recommend steps be no greater than 7 3/4-inches high to accommodate the average person’s step and not change in height greater than 3/8 inch between steps.
Structure: More information than is reasonable for this page could go into the “structure” section, but here’s some of the main points. Footings: these should be installed at a minimum depth of at least 12 inches or below the frost line, whichever is greater. Pier blocks, which are widely used, are almost always inadequate. Another important thing to keep in mind in relation to posts and footings, is drainage. Poor drainage can erode the ground in which the deck is secured and cause it to collapse. I often see this as downspouts draining beneath the deck or on homes with decks built on a slope. Water comes downhill and takes the ground with it. Additionally, the supports and connections should be connected in a manner that can handle lateral and uplift loads from heavy weather or seismic activity. 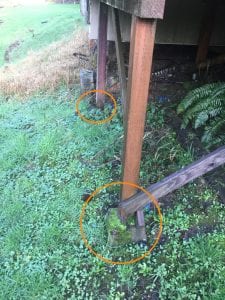 Deck Boards: Deck boards should be made of an appropriate weather-proof material or be treated. Untreated pine or fir rots quickly when exposed to water. This is not only an aesthetic and safety issue, but also can attract wood-destroying organisms, like termites and carpenter ants. In fact, wood rot itself is a wood-destroying organism that can spread to healthy wood of the home if given time and proper conditions. Decks also need to drain. If water sits on the deck with no where to go, the deck is going to deteriorate more quickly and require more maintenance more often. Deck boards should be spaced appropriately, not too tight, to allow water to drain.
Maintenance: Deck maintenance is important. Without it, a cheap, relatively easy issues can turn into a costly headache. Cleaning the deck regularly of debris, like leaves and pine needles, goes a long way. If your deck is made of wood — even cedar, which is generally more weatherproof than pine or fir — you should apply waterproofing sealant as a regular part of annual or seasonal maintenance to help extend its life. Here’s a helpful article on deck maintenance.

Ready to schedule your home inspection?